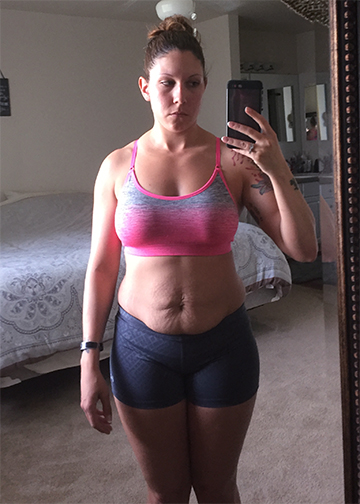 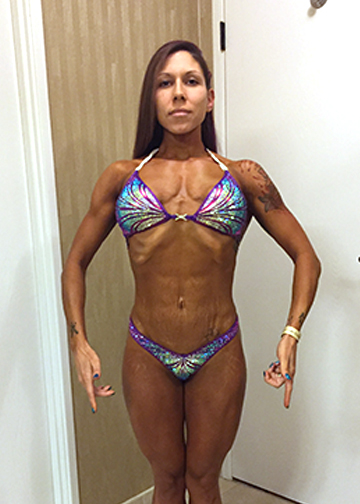 As a military service member, I had always been considered “athletic”, I could meet the physical fitness standards and that was about it. It wasn’t until my second deployment to Afghanistan I really got into lifting weights and really enjoying it. Someone had asked me if I ever considered doing fitness competitions. That sparked my interest and I was introduced to the world of bodybuilding and fitness competitions.

After returning from deployment I received orders and moved to the southern California area. I then become pregnant with my second child. I told myself I would be a “fit mom” and still go to the gym, but sickness and exhaustion from the demands of work took over and let myself go terribly. I gained about 50 pounds with my pregnancy. I delivered a 9lb 7oz baby boy in August of 2015 and after the 6 weeks recovery I was roughly 150lbs. For someone who is only 5’2, 150lbs did not look so great on me.

In October, I started back at the gym but had no motivation or energy. After the holidays had come and gone I told myself it was time to get serious about my fitness. I wanted to compete, so I asked people around the gym that had competed before, where I could find a coach or someone to help me. A good friend referred me to Jon McQueen so I reached out. I was nervous to meet with Jon at first. I thought he would take one look at me and think I was a lost cause to compete. I had my consultation with him in February of 2016 and I loved everything about his programs. He explained how macros worked and how I could still eat what I wanted as long as they fit my macros. I started my program in March and it took me some time to shed some weight but once I did I was very happy with how things where turning out.

In June, I went to the Dallas Europa show with my best friend who competes and just being around that competitive atmosphere brought back my aspiration to compete. I told Jon I was ready to find a show and commit to it. I picked a November show and when the time came, Jon switched gears and I began my 12 week show prep. Not much changed at first since I had already been on a “weight loss goal” type of program.

At about 6 weeks in I struggled a bit with school demands, mommy life, and all that goes into preparing for a show. I wanted to quit. Jon, along with my support system, helped me through and I stuck it out. I had always dreamed of doing a show and it was finally becoming a reality.

On November 5th stepped out on stage at 116lbs and even placed 5th in my class. I never thought I would place, but with Jon’s knowledge, advice, and constant counseling I reached my goals. I will continue to compete and as Jon as my coach I hope to see 1st place one day!

SEND US AN EMAIL

About Us
Jon McQueen
Location